Now that you have launched the app you desire, is it all from your iOS app developer? We say NO. There’s a lot more to do for your business applications post-launch. To make sure you keep your iOS app working smoothly in the future and know what your development partner should do, read further.

Indeed the wide range of excellent iOS app development services make it absolutely easy to execute your app idea. However, to ensure the best performance of populus Apple devices, these apps need to look out for a lot more.

App performance plays a crucial role in meeting users’ expectations. If you don’t pay attention to the same, it would become unresponsive. This could be a nightmare as users won’t take long to kick out such an app from their device.

The Apple App Store has millions of varied apps. It’s important that your application stands out and performs well enough to secure its place on the users’ devices. But as said, app performance optimization is a greater problem (if you let it be).

To understand what’s making your app lag, you need to take appropriate measures. Read further to know the best measures and metrics to consider for optimizing your app’s performance.

Why is it Important to Optimize iOS App Performance

A mobile app’s performance is not dependent on just data structures, algorithms, or memory. The overall performance should give an impression that the application responds to requests as quickly and efficiently as possible. That’s why monitoring app performance is necessary.

Cloud services simplify storage and processing for your iOS app development solution. However, network data transfer is still a complex problem as it may take time.

Users always expect an app to perform excellently. If it takes longer to load or reacts too slowly, it would make a sluggish impression. We need not tell you again that no one wants such apps to occupy memory space on their devices.

An app that sends too many data requests consumes data charges and battery. This can irritate the user, causing them to delete the app.

App performance optimization is a continuous cycle that follows throughout the existence of an application.

Based on your study of your app’s performance and other important aspects, you can plan and implement a performance optimization. Needless to say, you can hire dedicated iPhone app developers to do it perfectly for you.

To summarize, the app performance optimization process requires you to:

You can easily catch up with the best process of app performance optimization. But there’s a more important question you need to answer to proceed.

How to measure iOS app performance? 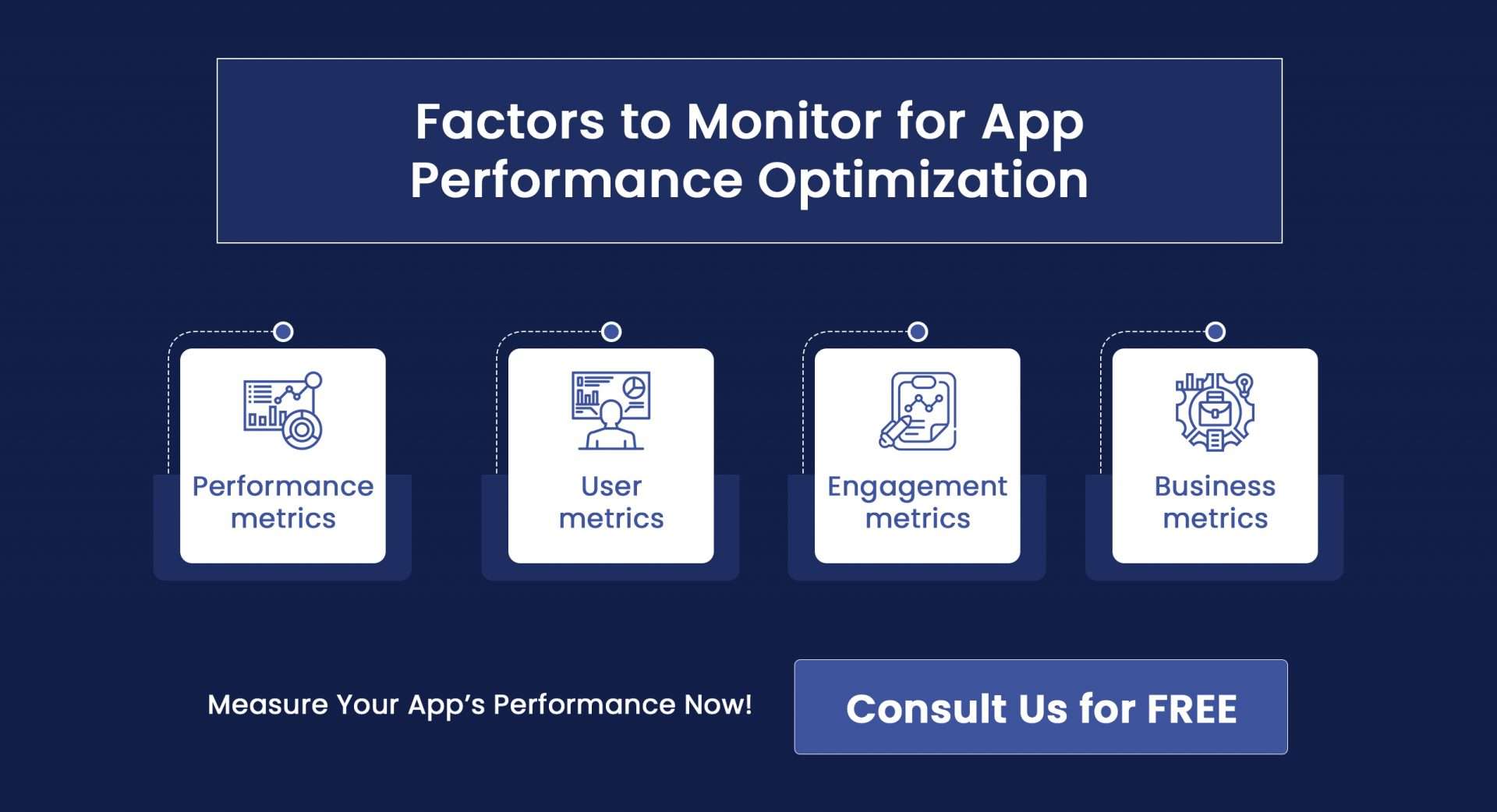 There are several important aspects you should consider in order to come up with a reliable conclusion. These metrics help you in a clear evaluation of the problems leading to better solutions.

There are generally four types of metrics to consider to evaluate app performance: Performance, User/Usage, Engagement, and Business Metrics.

To evaluate your app based on its performance, there are again a few sub-metrics that you should consider. Let’s take a closer look at each one of them.

App size does not affect the in-app performance in any way. However, it does affect the user’s decision to download it. Mobile users have limited memory space. An app that’s too large may restrict people from its access.

Keeping the users’ convenience in mind is crucial to make sure that your app makes it up to their devices. And most importantly stays there.

How an app is launched on a device significantly affects its performance. A few years ago, Apple released several suggestions and guidelines for app launch to make sure iOS applications performed well. A reliable iOS app development services company shall help you with it.

There are three types of app launches for iOS:

Cold Launch: Occurs when an app isn’t fully loaded on the device memory or the device reboots.

Warm: When the app loads partially on the device memory or got terminated recently.

Resume: Occurs when the application is suspended but fully loaded in the device memory.

Considering the best practices would make sure that your app’s performance is enhanced.

Apple has stated the importance of performance testing for iOS apps quite well. Any app that responds quickly creates an impression that it’s helping the user solve their problems. Instant reaction to clicks and taps lets the user know that they are able to manipulate data in real-time.

When the app fails to respond, it makes the user question its ability to solve problems or barely function. Users won’t take long to observe that an app is being unresponsive. It’s crucial to pay attention to the swift performance of your apps.

This is a technical concept. Hence you will require guidance from an iPhone app development company.

API latency is the overall time taken by an API system to respond to API calls. In simple terms, it’s the time that the user waits after performing an action while the session is alive. Maintaining an acceptable API latency can be a task for the developers.

High API latency makes your app slow, and users will eventually abandon it. As per the basic rule of thumb, the API latency should be less than one second.

Tracking API latencies isn’t enough. You need to know if the app is taking long to respond to APIs. As said earlier, the time taken should be less than one second.

Although some users may be fine with slower responses up to 3-4 seconds, the data states otherwise. Around 60% of them will abandon the site, cancel purchases and even uninstall the app.

All mobile app users have experienced crashing at some point or the other. However, too much of it may not be great for your app. You can calculate the average crashing rate easily. It’s the average number of crashes per app load.

Generally, the average crash rate is 1-2 percent. But it varies for different app types and maturity along with other factors.

The number of calls or transactions over a certain period impacts the performance of your iOS app. It’s crucial to ensure that the increasing load doesn’t pull down an app’s performance. For some apps, the load can get spiky. Therefore, make sure your application can handle the fluctuations in overall load.

Network errors are basically the HTTP errors that an app faces while interfacing with a networked service. These can cause slow response time or app crashes. Therefore, it’s important to keep a check on them.

When you hire iOS app developers, they will let you know about the following aspects of usage metrics that affect app performance.

There are several different versions of iOS. In order to make the best out of your app, you should know where your customers are. A study of the devices and OS versions they use will improve the chances of success for your app.

Being specific about app usage in terms of location will get you some positive results. Customizing and preparing your app according to the geographical location of the users can make it more relevant. Therefore, while measuring an app’s performance, geographical or regional user data would be of great use. 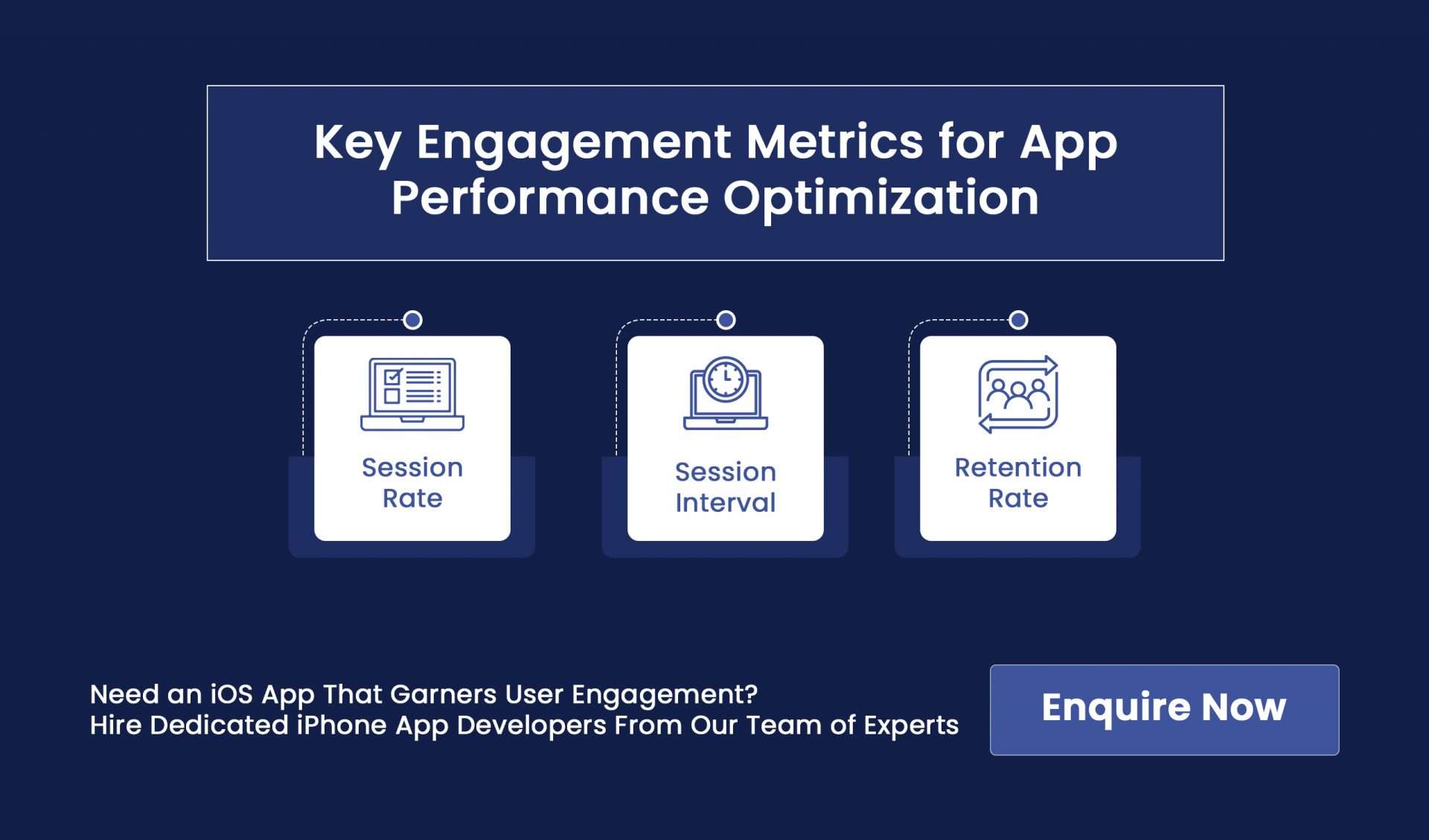 Any experienced iOS app development services company will tell you how important engagement is for successful apps.

Session length is the time taken for an app to open and close. It reflects how much time a user spends on your app in a single session. Longer sessions mean longer engagements.

The period between the initial and subsequent sessions by a user is identified as a session interval. It indicates how frequently an app is opened. Also, it highlights the immediate benefit of installing an app to solve a problem.

We understand you must be investing a lot of resources in iOS app development. Certainly, your apps are worth a lot more than these stats. Retention rate is the percentage of customers who return to your app after the first use.

The major purpose of having an app for your business is to maximize revenue. Here are some key business metrics that determine an app’s performance.

Customers will discover your app through various paid and unpaid sources. Understanding the channels that bring the most loyal customers who stay will help a lot. You can further manage to advertise your app accordingly to get optimum results.

Transaction revenue is the value of transactions supported by an application. Although it’s generally applicable for applications that offer MCommerce services, one can approximate it for non-commercial apps as well.

An imbalance between the cost and revenue could be a problem. Therefore, it’s an important aspect to consider during performance optimization.

The abandonment rate is the proportion of transactions canceled versus the ones that are initiated. As discussed earlier, there may be various reasons for abandonment. Your iOS app development services company  must guide you with the same during performance optimization.

However, an increasing abandonment rate is a sign that your app isn’t meeting users’ expectations and their need for improvement.

App store rating is one of the most visible indicators of an app’s performance. Ratings and reviews are public evidence of excellent applications. If you see a problem in this area, maybe it’s time to seek a solution.

Lifetime value is a key revenue statistic for your app. It reflects the worth of each user during their lifetime. It’s an important aspect to keep in mind for the long run.

While you are focusing on app development to boost your revenue, here’s why iOS apps help you earn more.

Read Our Blog: Does iOS App Development Generate More Revenue for Your Business?

iOS app development does not solve all your business problems. It’s crucial to keep a check and optimize app performance from time to time to make sure it’s working as per your goals. After all, you must have invested a lot of resources into it.