Ruby on Rails is a fantastic framework for building web applications with powerful capabilities. It helps in the speedy development of a web project using the MVC approach. It’s built in such a way that any ror developer can easily use the most common Ruby gems available in the Rails community. It facilitates the quick development of an MVP. That’s why it is the go-to framework for startups.

In this article, we will discuss important Ruby gems that ease the process of Ruby development. 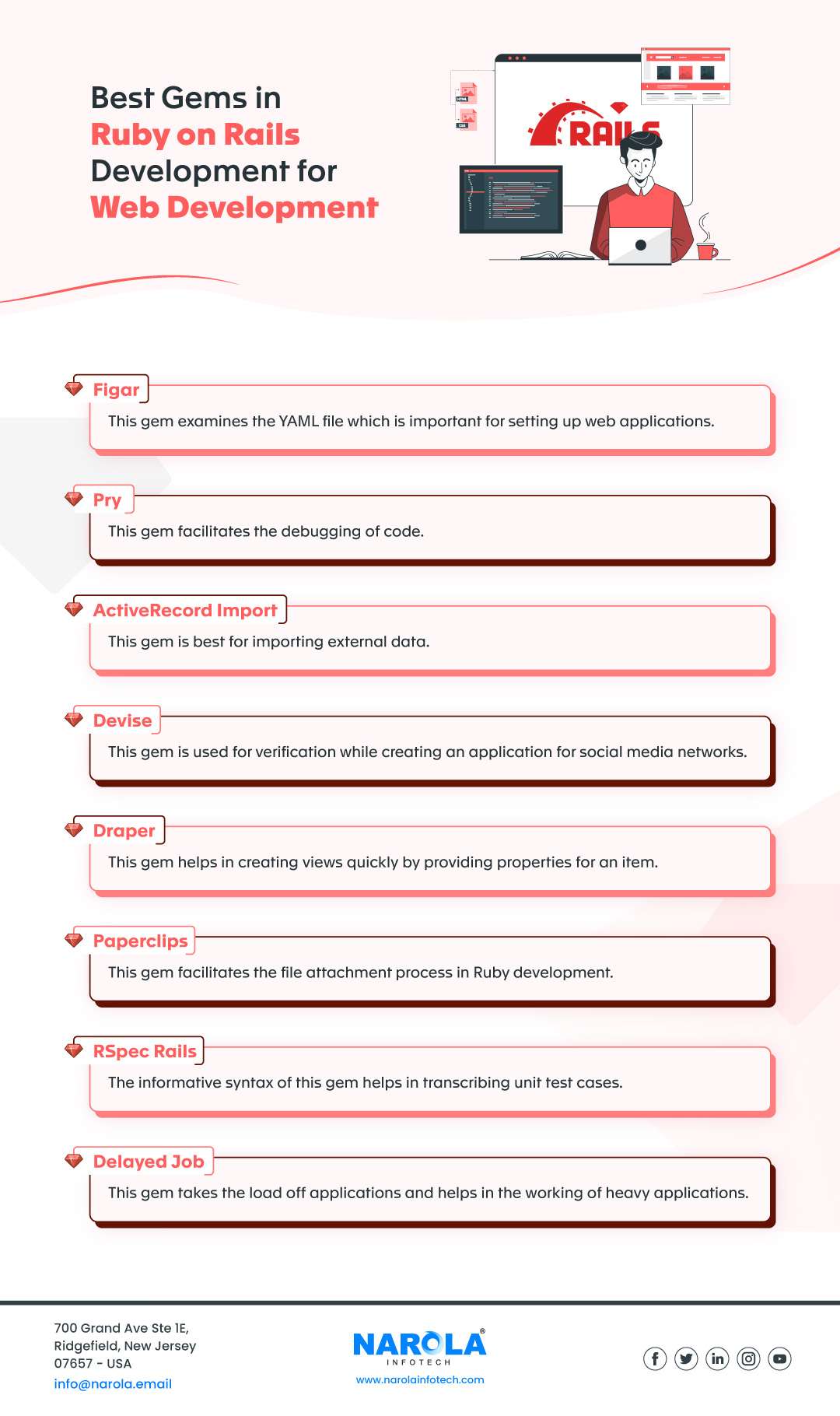 Figaro is a Heroku-based Rails gems application arrangement and is one of the most popular gems in ruby on rails development.

For a safe setup of web applications built with Rails, developers need a YAML and an Environment Variables (ENV) record. This gem keeps the organized data and SCM apart from one another. It examines the YAML file and populates the ENV with its contents.

When developing code, developers regularly run into issues with library integration, especially when using Ruby gems. There is also a possibility of mistakes at that time.  As a result, it’s preferable to hire an experienced ruby on rails development company with a lot of expertise.

Pry is an excellent solution for removing these issues and debugging the errors. Developers may use this gem to establish breakpoints and gradually debug code.

Some unique features of Pry are-

Another important part of Ruby on Rails development services is the ActiveRecord Import gem. Developers can use it to quickly implant all of the records. It works with ActiveRecord associations and generates minor SQL insert statements as needed.

Using this Rails gem to upload a large number of records can be a daunting undertaking. It is, nevertheless, quite useful for the import of external data. With ActiveRecord Import, the transformation time is significantly decreased in ruby on rails web application development.

Developers often need to log in to the social media website when developing an application for any social media network. They have to provide authentication and authorization for a certain app.  While some ror developer teams prefer to use their code for the purpose, others prefer using a Ruby on Rails gem for verification.

One of the finest Ruby on Rails gems for this purpose is Devise. It makes the task simple and efficient.

Devise gem uses 10 modules which are-

The Rails developers may have to deal with the web page’s non-optimized URL. FriendlyId is useful in this case. It transforms the URL into a unique and responsive web page URL.

The best thing is that it doesn’t require any changes to the web application’s code. That makes it a popular Ruby on Rails development gem.

Developers use Draper gem to create decorators for a model. Drapers provide properties and methods for an item. This gem can create a view more quickly. Developers can easily specify a decorator without transcribing helpers.

Working with file attachments may be a time-consuming operation. That is because it requires a lot of effort and time for the developers to secure the assignment.

This is where Paperclip comes to the rescue. It maintains a tight grip on Ruby on Rails web development applications’ whole process. It can also convert photos to thumbnails to use in customized Rails applications.

When it comes to transcribing unit test cases, developers choose the RSpec Rails gem. That is because it allows them to include the RSpec framework into a Ruby on Rails web application development project.

This well-known Ruby gem is used in behavior-driven programming and test-driven web application development. It has a well-organized and informative syntax.

Delayed Job is one of the most useful gems in Ruby development. It avoids the more stressed-out consecutive actions for background operations. When it comes to handling vast operations, the Delayed Job gem is the best Ruby gem.

Ruby gems are the best way to develop a web application. But you still need a team of professionals to work with them. You can hire the development team from our web app development company for your development needs.

Narola Infotech’s RoR developer team is well experienced in using Ruby gems. That will not only help in making a well-functioning app but will also reduce the time-to-market. Contact us today to discuss your project requirements.