Should You Choose Java or Python for Data Science?

Why would anyone ever need to develop software in the data science category? If truth be told, data science is a large field of technology. It deals with processing raw data that renders valuable information.

What Is Data Science?

Data science simply is the extraction of valuable data using scientific means. This involves using algorithms, processes, and methods, to process structured or unstructured data. This raw data would otherwise be difficult to sort through without such software.

For every business, data science is an important activity. This filtration of data can be beneficial for business operations in many ways.

Benefits of data science for a business are:

Now that we have highlighted the importance of this software, let’s help you decide if you should hire Java programmers.

Picking out the most ideal technology for the development of applications significant for enterprise establishments is not a light decision! Choosing the wrong one will render your application useless. Not all programming languages come with suitable libraries and features!

Two options that tend to stand out from the plethora of technologies are Java and Python. Immediately a question comes to mind. Java vs Python, which is better? What about these two programming languages catches the attention of businesses who need data science solutions?

Let’s take a deeper look at how exactly Java and Python can be used in data science and more particularly which is better Java or Python. We will start by comparing a few points of both technologies.

Differences Between Java and Python

Java and Python have been around for a long time. Extensive efforts by the developing community have fortified both of them as reliable software development languages. 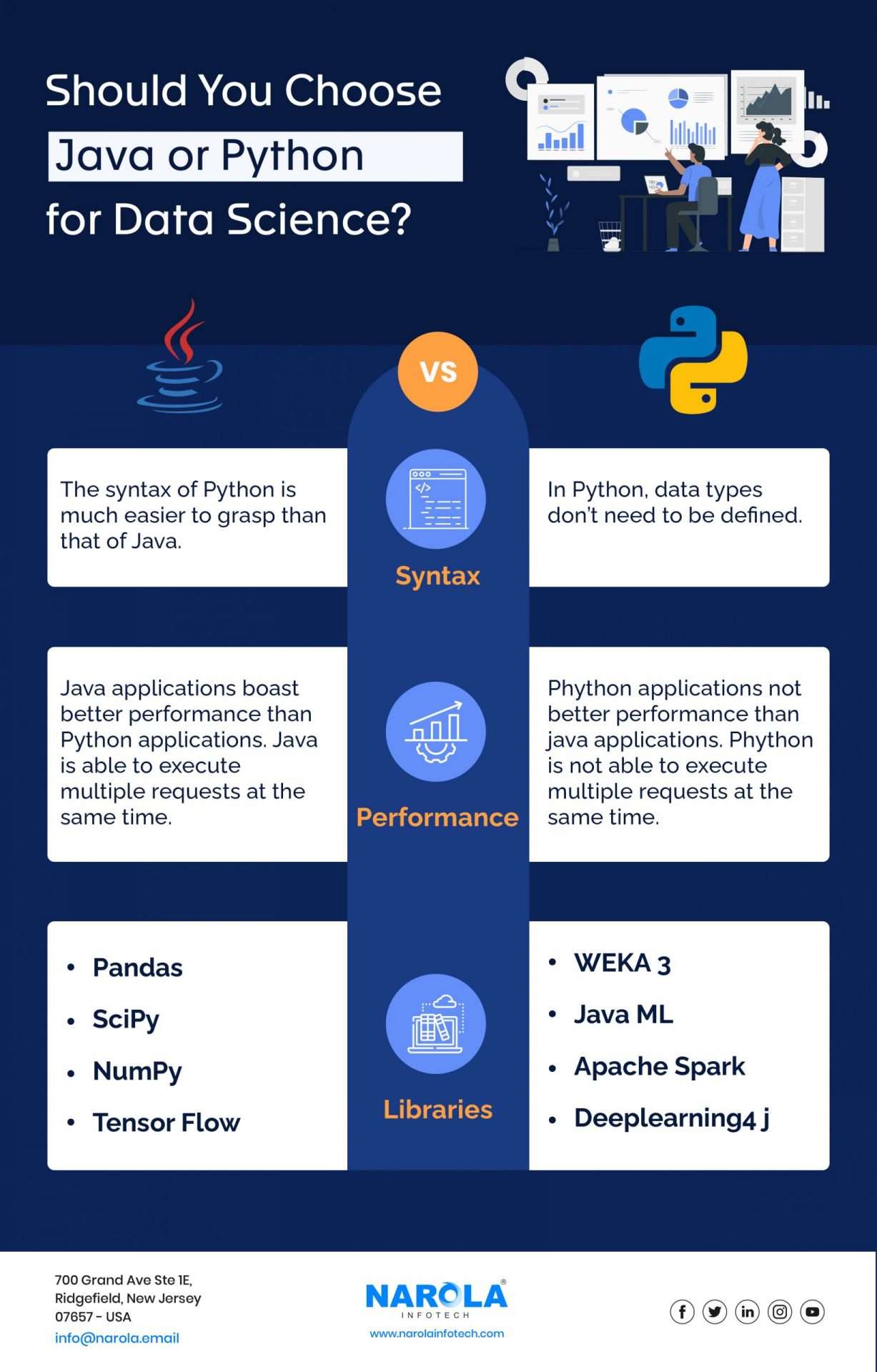 Java has a defined syntax. At the time of coding, the developer must define the data type of variables. Throughout the program’s lifetime, this data type cannot be changed at all! It is this feature that differs in Python development.

In Python development, the developer does not have to manually define any data types as they are automatically assigned. Plus, throughout the process, these data types can be changed. This makes Python a dynamic programming language and much more flexible for businesses.

That said, Java follows syntax rules strictly. A missing semicolon or bracket anywhere in the code will result in an error! But in Python, such rules do not apply. Naturally, this makes Python much easier to learn and code with.

If you hire Java developers with much experience in Java coding, there won’t be any problems with syntax errors.

When it comes to speed, there is a notable difference in the performance of both technologies.

On the other hand, Python’s performance is underwhelming. Python executes code line-by-line! This as you can imagine will lead to a great decrease in the speed of Python applications.

Both Java and Python are technologies that can be used to develop applications that sort through and retrieve important data. Based on the data found, it could be used for analytical purposes or machine learning.

If a Python web development company needs to develop applications for data science purposes, it would use these libraries.

The Pandas library is a well-known, if not most popular library in the Python language. It is a valuable library because it is useful in the process of data munging or wrangling. Data analysis is possible by using series and data frames. A major bit of Python web application development for data science makes use of the Pandas library.

A short-form for Scientific Python, SciPy deals with applications that relate to Science, Mathematics, and Engineering. With this library, it is possible to solve problems that involve linear algebra, statistics, and optimization.

NumPy or Numerical Python is for enterprises whose job is to deal with high-level mathematics. It is the base for all Python libraries with use in mathematical applications.

Developed by the Google brain team, TensorFlow is an open-source library that aids in the implementation of deep-learning applications.

We know the scientific libraries of Python. Time to see what libraries every Java web application development company needs to know!

WEKA 3 stands for Waikato Environment for Knowledge Analysis. It is an open-source library that facilitates the development of applications that are used for data modeling, analysis, and data mining.

Also known as Java Machine Learning. This library comes with the ability to develop calculative applications. These applications are capable of data processing, classification, and analysis. A Java development company will be able to master this library as machine learning is an expanding field.

Apache Spark may be the most important library in Java for data science. With its capability of processing large data subsets, many other libraries are based-off on Apache Spark. Various built-in modules come with Apache spark, these include Spark MLli, Spark SQL, and Spark Streaming.

The name suggests the use of Deeplearning4j, deep learning. It is most applicable in Java app development involving machine learning.

When assessing the strengths of both Java and Python, Java wins performance-wise but Python wins syntax-wise. This leaves it all up to the libraries available in each technology and how effective they are at their purpose.

Both have efficient libraries and it is very difficult to separate them in terms of library numbers and effectiveness. Either one you choose will be highly effective for data science software development!