Ruby on Rails vs NodeJS : Which is the Best Backend Framework

Developing web applications in the prevailing competitive environment involves a lot of decision-making regarding the best technologies. Many organizations prefer either NodeJS or Ruby on Rails development services for the backend. But we want you to have the best resources to help.

Choices are often difficult. And when you have to choose from the two most prominent frameworks, everything seems obscure. So, which is better: Ruby on Rails or NodeJS?

We have some facts and features which will help you understand the two frameworks well. You can analyze how they affect the development of your business applications. We believe you can make better choices when you focus on business goals and not the framework’s features.

This comparison is based on a similar concept. Before getting into features and characteristics, let’s get a basic idea of these frameworks. 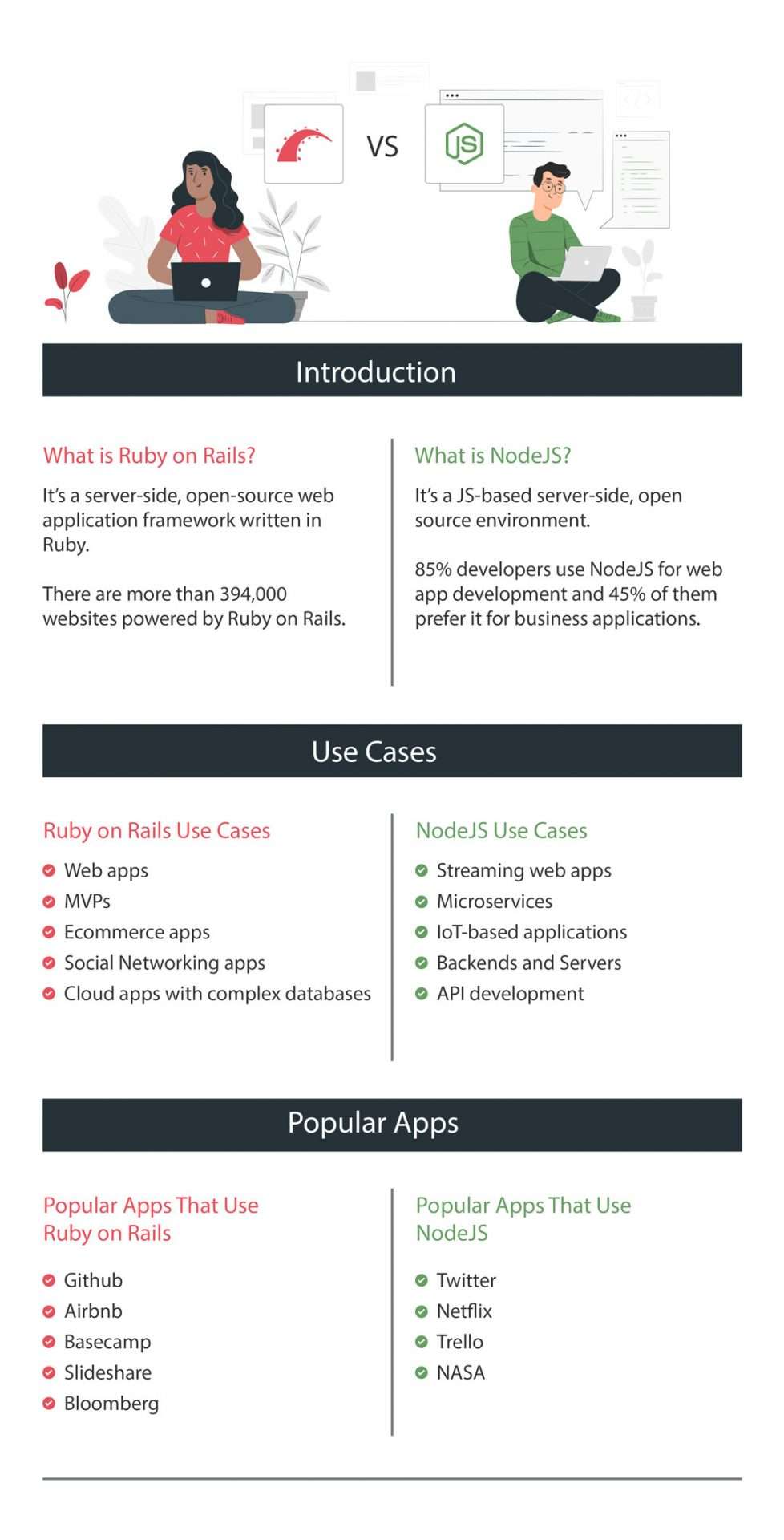 Ruby on Rails vs NodeJS: Finding the Better One

A technology that works well for one project may not be efficient for the others. Understanding how they function in different scenarios might help you make progressive decisions. Dive down into different aspects of Ruby on Rails and NodeJS through comparative lenses.

Performance doesn’t have to be a primary concern for most small projects. However, it has a notable impact on long-term projects. Let’s get to know more about the performance of these frameworks.

Is Ruby on Rails Efficient?

Most companies fail to see behind the curtains statements that say RoR isn’t the most performant framework. However, a few of them don’t want to miss out on what it has to offer and seek RoR software development services. There are only specific circumstances where garbage collection and using Ruby as an interpreted tool may be a slow process.

Whatever the case may be, Ruby on Rails offers satisfactory performance when the right development standards are followed. With best practices, the Ruby on Rails framework can help you create efficient applications.

NodeJS creates a perfect environment for small tasks with the non-blocking and asynchronous processing it inherits from Javascript. As a result, smaller tasks don’t affect the main application. In most cases, NodeJS gets a winning edge in terms of multitasking and speed.

This framework can process multiple requests simultaneously. Maybe that’s the reason why many tech giants turn to this technology.

Frameworks have a significant impact on a web application’s scalability. Therefore, it’s necessary to choose a framework wisely when getting web application development services.

Is Ruby on Rails Scalable?

With a bunch of additional resources, Ruby on Rails is perfectly scalable. While a few examples may indicate otherwise, Airbnb and Shopify are good examples of how Rails can handle high traffic efficiently. Scaling these applications may take time, but it’s never an impossible task.

Does NodeJS Have Any Scalability Limitations?

NodeJS scores are good for scalability. It comes with an event-driven model and non-blocking I/O that helps in processing concurrent requests. NodeJS handles microservices quite well by segregating an application into different parts. Thus it allocates tasks efficiently to scale quickly.

Strict enforcement of guidelines and architecture often limits you. Therefore, it’s suitable to focus on flexibility when choosing a framework. You should treat a framework as a guide rather than a standard or method. Let’s see how it works for NodeJS and Ruby development.

Rails also follow the convention-over-configuration principle. This means the framework often decides for the developer and reduces legwork.

What Architecture Does NodeJS Support?

NodeJS uses single-threaded event loop architecture that makes it easier to handle concurrent requests. It also lets you use the MVC/MVP architecture that isolates any onboarding issues with the codebase. NodeJS allows asynchronous communication between various components by creating multiple views for the same data.

Applications and websites need to go through a series of tests to make sure the best UI standards are put to use. While this is essential to stay in the highly competitive market, it may be necessary to choose a framework that helps. Let’s see how Ruby on Rails and NodeJS help in detecting glitches.

Is it Easy to Test Ruby on Rails Apps?

As a Ruby on Rails development company, we know that testing is simple and easy to conduct with the framework. It seems as though testing is intrinsically woven into the Rails environment.

Rails automatically produce a skeleton test code as soon as a developer creates models and controllers. Also, Ruby on Rails focuses on some of the best development practices. This makes the testing phase a lot more sophisticated, causing fewer intricacies.

Is it Easier to Test NodeJS?

With its component testing and debugging capabilities, NodeJS also makes testing simple. It has a rich ecosystem with third-party tools and frameworks. You can leverage various testing libraries to make sure that your users get bug-free experiences.

Since database management plays an important role in the successful development, it should be one of your concerns.

Ruby on Rails is configured for SQLite. However, developers are free to choose from several other database management systems like MySQL, Oracle, PostgreSQL, OpenBase, and Microsoft SQL Server. Rails lets you use multiple databases at once so that you can manage data even better. You don’t have to put everything into one place.

How Good is Database Support for NodeJS?

NodeJS supports all relational and NoSQL databases. However, using NoSQL databases like MongoDB is considered the best. It stores data in JSON objects that are easily accessible to JS-based backends. For relational data management, you can use “mongoose.” 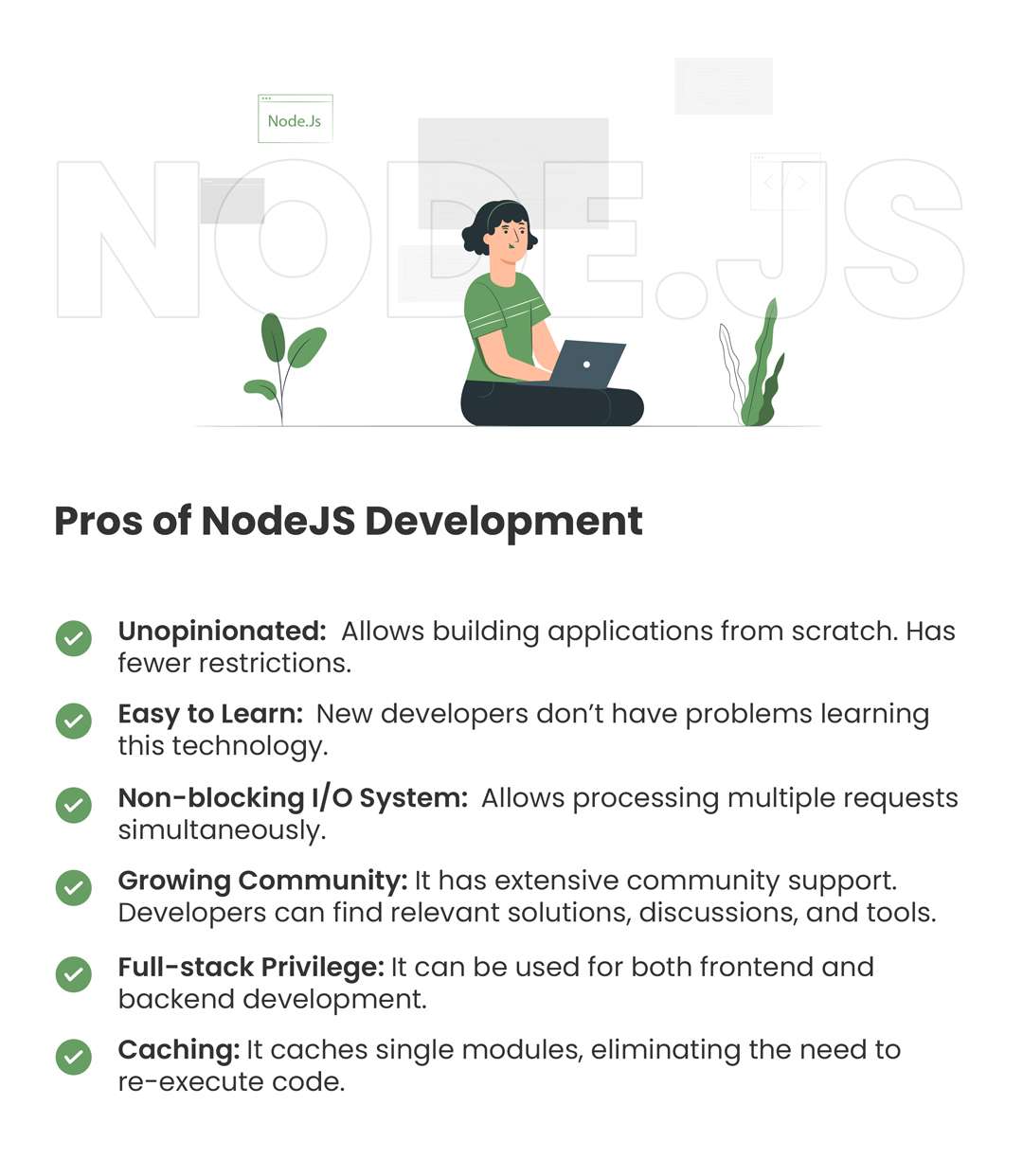 Many applications are based on microservices these days. If you are seeking web application development services for one of such projects, make sure to decide rationally.

Is Ruby on Rails Development Suitable for Microservices?

Ruby on Rails development services have been popular as far as monolithic architectures are concerned. But does that make Rails incompatible with microservices architecture?

Airbnb is one of the best examples to understand the answer. It initially started with a monolithic structure but switched to a microservices architecture as the business grew. 3500 microservices were deployed every week. Thus, Ruby on Rails can efficiently manage microservices.

Is NodeJS a Better Match for Microservices Architecture?

Both Microservices architecture and NodeJS are based on building smaller code modules and services. NodeJS can handle multiple concurrent requests, which makes it perfect for creating scalable apps. NodeJS is a great choice for complex business applications.

Although the size of the community doesn’t determine the efficiency of a framework, it does affect how easily you can solve problems along the way.

Does Ruby on Rails Have a Growing Community?

Including beginners to experienced professionals, Ruby on Rails has an expansive community. It has 4000+ contributors on Github and 1,54000 followers from other platforms. You can find plenty of discussions and necessary help for solving problems during development.

How Large Is the NodeJS Community?

NodeJS has an extensive community, with 51.4% of professionals using the framework. Various industry giants, including Amazon, Facebook, and Google, have made this technology even more credible by making significant improvements to it.

So, who gets the title of the better framework? Should you choose Ruby development over NodeJS or vice versa?

Logically, there’s no specific answer to this. Buth Ruby on Rails and NodeJS carry their unique capabilities and flaws. However, based on the above comparison and discussed characteristics, you can decide which framework meets your project requirements.

Ruby on Rails can help you come up with a cost-effective MVP or an eCommerce store with various sophisticated options. You can also use it for API integration on SaaS platforms or creating informational platforms.

Whether you want to hire ROR web developers or get services related to NodeJS, you can always look up to Narola Infotech. Based on your project type, we will help you make the right choice and leverage the best development resources.