ReactJS – Is It Really the Best Frontend Maker?

When the first impression of your app depends on how it looks, it is hard to undermine the significance of the frontend. There is no use of a robust backend when users won’t install the app. This is where ReactJS web development comes in.

Frontend doesn’t just mean the visual appeal of the app. It also acts as the face of the brand. Successful branding depends on how the app looks and functions. Navigation, load speed, interaction, etc, everything plays an important part in making a first-time user a loyal customer.

That’s why it becomes extremely important for you to choose the best technology for frontend development. There are many languages and frameworks for making the frontend of an application. But one name that stands out is ReactJS. You must be wondering why and that is exactly what we will discuss in this article.

We will start from the basics and will go on to discuss the features and benefits of ReactJS. So, let’s get right into it!

In 2011, Facebook’s developers began to have challenges with code maintenance. The team needed extra employees to maintain the Facebook Ads app as the number of features increased.

However, the increasing number of team members and app features negatively impacted the company’s growth. As a result of the numerous cascade changes, their app grew harder to manage over time.

After a while, Facebook’s programmers couldn’t keep up with the constant stream of changes. Their code needed to be updated immediately in order to become more efficient.  As a result, Jordan Walke created a model that made the process more efficient, and ReactJS was born.

Many developers were not happy with ReactJS development services initially but constant updates and fixes changed their perception. The turning point was in 2015 when Netflix and Airbnb adopted ReactJS. There has been no looking back after that, and ReactJS is now the best front-end tech. 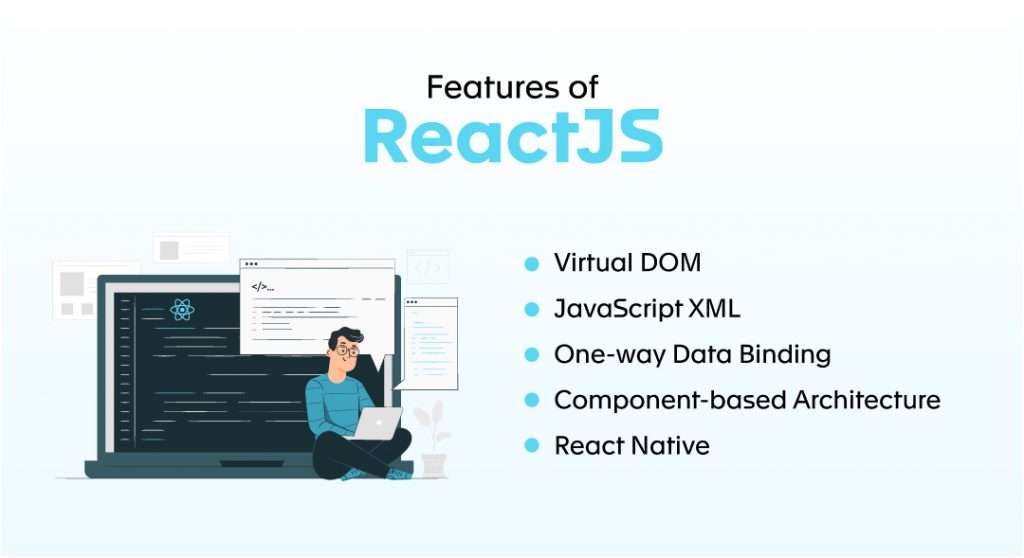 This React feature aids in the speeding up and flexibility of the app development process. The approach makes it easier for developers to replicate a web page in React’s virtual memory.  Therefore, a virtual DOM represents the original DOM.

The virtual DOM renders the complete UI whenever developers update an app. It does that by altering the components that have been modified. This cuts down on the amount of time and money it takes to develop something. Therefore, you should hire ReactJS developers who understand and know the working of virtual DOM.

It’s a markup syntax for defining the aesthetic of an app’s interface. It creates a syntax that is similar to HTML and that developers can use to create React components. One of the best features of React JS is JSX, which makes writing the building blocks extremely simple for developers.

This means that React uses a unidirectional data flow. That compels the developers to use the callback functionality to edit components rather than directly altering them.

Flux is a JS app design component that allows them to control data flow from a single point. It actually gives developers more control over the software, making it more adaptable and useful.

This basically means that a React JS-based app’s user interface is made up of numerous components. Also, each component has its own functionality written in JS. As a result, developers can send data across the app without affecting the DOM. The ReactJS components heavily influence the app’s graphics and interactions.

Custom ReactJS development services widely make use of this feature to improve efficiency and productivity.

To make native ReactJS development for Android and iOS easier, it uses native components rather than web components.

In a nutshell, this tool converts React code to make it compatible with iOS and Android devices. That allows developers to use their native features.

However, if an app has a high-quality user interface, there’s a larger probability that users will enjoy using it. As a result, creating rich user interfaces is needed for an app to survive and prosper.

React includes JSX, an optional extension that allows developers to create their own components. These components essentially allow HTML quoting and make all subcomponent rendering a pleasure for developers.

Sometimes an app’s logic is complex, and a single modification in one part might have a big influence on other parts. In that case, frequent updates can become a hassle.

It’s also a simple procedure! – For example, developers can start with simple components like buttons, text fields, and checkboxes and work their way up to wrapper components. These are then carried forward to the root component.

Each ReactJS component has its own logic that developers can easily change. This method generally results in improved code maintenance and expansion. As a result, the productivity of application development improves.

During complicated and high-load front-end development, it’s critical to specify the app’s structure from the start because it can affect the app’s performance.

The DOM model is tree-structured. As a result, a minor change at a higher layer might have a huge impact on the user interface of an application. To overcome this problem, Facebook has created a virtual DOM functionality.

Virtual DOM is a virtual representation of DOM that allows developers to test all changes to the virtual DOM first. It then evaluates risks associated with each change.

As a result, this strategy helps to maintain good app speed while also providing a better user experience.

ReactJS uses downward data flow to ensure that any changes to its child structure do not affect the parent structure. Therefore, when a React team changes an object, all they have to do is adjust its states and make the necessary changes. Only a single component will be updated in this manner.

As a result of this data flow and structure, the application’s code is more stable and runs more smoothly.

ReactJS has proved its mettle for building a solid frontend for applications, no matter the complexity. That makes it the number one choice for apps that need an aesthetically-pleasing user interfaces. But apart from the tech, what you need is the expertise to implement it.

Our ReactJs development company has developers that have been using ReactJS for many years. They don’t just have expertise in it, they are passionate about what they do. That offers them an advantage over the competition. If you want to use ReactJS for your app development, feel free to contact us.