Python is among one of the most popular programming languages in the world. There are so many popular websites that use Python development. However, there are still some misconceptions about Python doing rounds on the internet.

If you want to use Python, you must be aware of these misconceptions too. 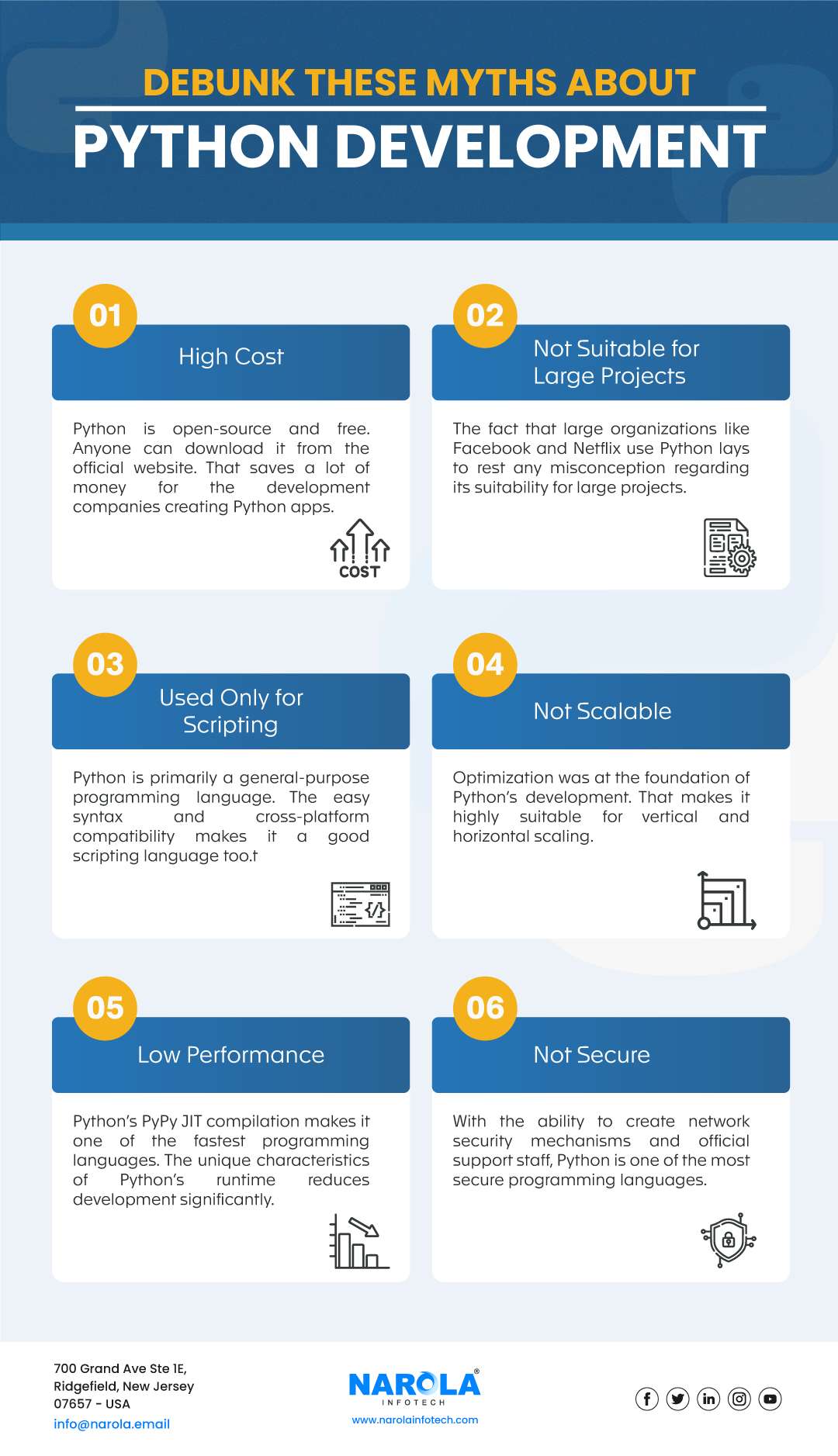 Python is free and open-source. Users can download it from the official website. Python Software Foundation (PSF) is a non-profit organization that builds, operates, and manages Python software. Its users have access to an Open Source License (OSL), which is available to businesses of all sizes.

The majority of its licenses are open-source. Some of its contributions are also licensed under the General Public License (GPL). The organization must incur the costs of not including the developer’s customizations in the open-source. It will remain proprietary to the company creating it.

Not Suitable for Large Projects

Used Only for Scripting

Developers can use Python web application development as a scripting language because of its easy syntax and cross-platform compatibility. But it should be highlighted that Python is primarily a general-purpose programming language.

This simple language supports dynamic typing. Hence, it can be used as both a programming and scripting language, making it ideal for business.

This is one of the most common misconceptions about Python development. Companies like YouTube and Instagram wouldn’t still be using Python if it did not scale. Python is created with profiling and optimization in mind. Therefore, it works well for horizontal and vertical scaling.

Python scales better in terms of code development time. This is because developers don’t have to waste time addressing segmentation faults, memory leaks, or writing files for compilation. This is also why every Ruby on rails development company uses Python to further develop its MVP.

Python does not have a performance limit. However, each Python runtime has its unique performance characteristics that can slow or speed up scaling depending on the environment. It is also worth noting that scalability concerns are more often caused by poor architecture than by a programming language.

Python is also said to be quite sluggish. It might be a little slower than C and C++ in some circumstances. However, it is far quicker than languages like JavaScript, Ruby, and others. Each Python runtime has its own set of performance characteristics and is not much slower than the others. PyPy’s JIT compilation, for example, achieves a speed that is faster than C.

Python is a high-level, dynamic language that does not require programmers to focus on low-level implementation or premature optimization. That allows a Python web development company to make the most of its development time.

Due to its limited code and easy syntax, many people mistakenly believe that Python development is less secure. The majority of developers believe that the code is vulnerable to cyber assaults. However, this is merely an assumption.

Python can create networking security mechanisms in the same way that other languages can. It is so secure in a familiar way that it can construct automation testing and security testing tools. They are considerably faster than other programming languages and can develop important systems on a small scale.

If any company using Python software development runs across security difficulties, the official support staff is always there to help. You can contact them at any time. They will keep your information private and share it only with the support team. Python’s use of safe third-party worldwide payment sites demonstrates its credibility.

There are a lot of opinions regarding Python that are merely misconceptions. Implementing with Python will give you a better view of it. When designing applications with Python, make sure you hire Python developers’ team that has a thorough understanding of the language.

In this regard, the developers of  Narola Infotech Python development company, are well-versed in its fundamentals. They have experience in developing applications using Python that are seamless and highly functional. You can contact us anytime if you wish to make an application using Python web development.