Throughout the years we have seen app development trends swing from one end to the other. As the digital spheres evolve, users’ preferences change. But one aspect that remains unchanged is the battle between iOS app development and other potential platforms (specifically Android).

We get it. There are numerous factors that determine the choice of development platform for your business applications.

But why are you even creating an app if it’s not for revenue generation?

As a thriving business, your main aim should be to expand your customer base and maximize revenue from different sources. When you invest in developing a business application, this goal should be met.

Take a look at the global market share for various mobile operating systems. 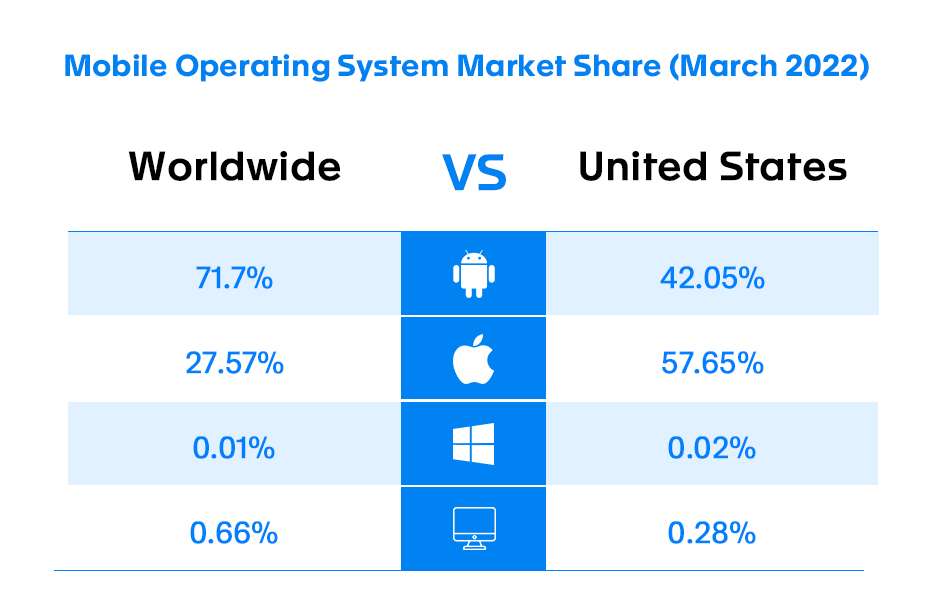 Despite what the market share says at most geographical locations, iOS applications make more money. And this is one of the many reasons why businesses seek iOS app development services. It’s also important to note that iPhones remain popular in high-income areas like the United States. The stats above clearly indicate the same.

However, we don’t want you to make any decisions based on just a few numbers (after all, they keep changing). So, let’s dig deeper.

Well, this is an important question that should be answered before you make any decisions regarding your business app. Even though iOS applications don’t have the greatest share in popularity, they are clear winners when it comes to revenue generation. Here are some facts and information to justify the same.

Many reports in the past have said that Android users are less willing to pay for any apps than Apple users. On the other hand, iOS/Apple users are 10-20% more likely to pay for the applications on their phones. As a result, there are more paid apps on Apple App Store than on Google Play Store.

The fact that most Apple users are financially solvent and spend more power than other users justifies this enough. This is general science that you can use to determine the best OS for your app based on its intent and target audience.

Unlike the Apple App Store, the Google Play Store has more free apps that follow the freemium models. These apps generally earn from ad displays in between app sessions and offer some premium features that users can purchase.

But again, iOS users are more likely to pay for in-app purchases than Android users. Several researches have proved this. It’s another important factor why iOS apps generate more revenue.

Thus publishing your app on Apple’s app store will help you generate more revenue than the Google Play Store. Generally, development resources are costlier, using them to create apps for consumers with low app spending isn’t the best decision.

Android smartphones remain dominant in China, just like in the rest of Asia. However, the Google Play Store is restricted in the Chinese market. Ever since the Chinese authorities banned the Play Store in their country, China overtook the United States. It became the largest market for iOS app revenue.

The Chinese population is eligible with the necessary spending power to purchase iOS apps. The absence of the Google Play Store in China means it’s just iOS apps vs. other counterparts. If you are focusing on a specific population from other countries, then you probably need iPhone app development. 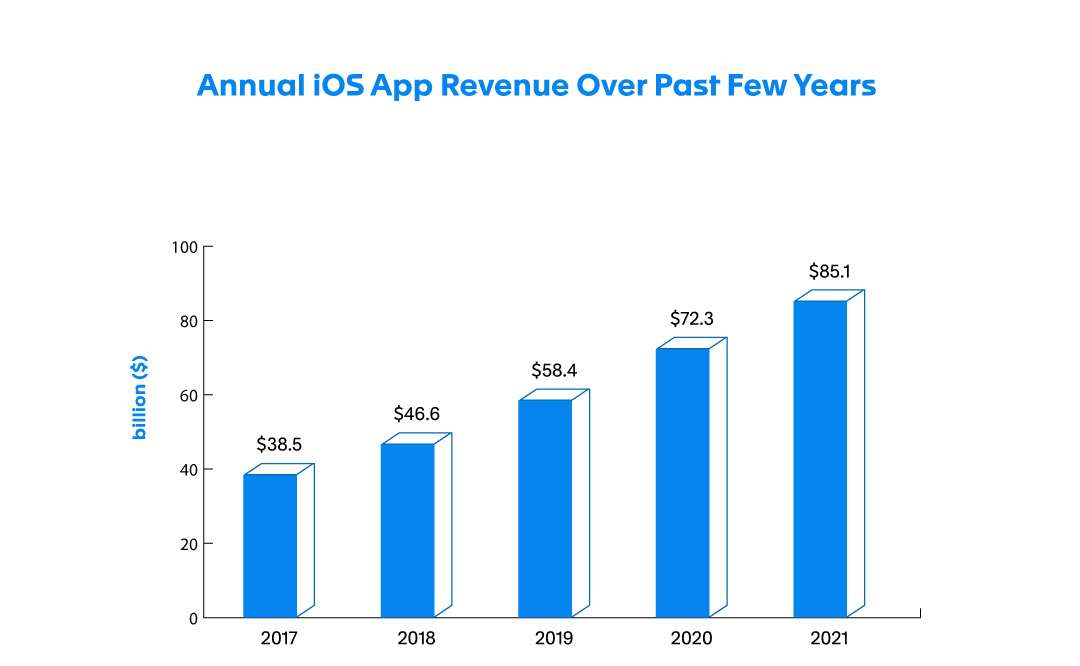 Do you wish to get a clear opinion on whether you should develop your app for iOS or Android first?

Meanwhile, let’s get back to the current topic of discussion. Revenue isn’t the only reason you should be seeking iOS software development services for your business. Know why is it lucrative?

Why is iOS App Development Beneficial?

Here are some important reasons why iPhone app development can make your business a clear winner.

When dedicated experience is offered for iPhone/Apple users, they are more likely to turn into your loyal customers. iOS platform offers a premium, higher user experience, which makes it the popular OS among users and developers. This is going to reward your business in the long run.

We have already discussed details in the above section for why iOS apps generate greater revenue. iPhones make their place in the premium marketplace and their users have higher incomes. Thus, they will always seek better tools and services even when they cost higher.

The greater the monetization, so will be the revenue. iOS/iPhone users are more likely to purchase apps and also make in-app purchases. These apps are less prone to be pirated due to the closed environment.

Apple has complete control over its devices and software. It’s a closed platform with strict guidelines for interactions. Apple is solely responsible for its software and hardware updates. Also, iOs users are more likely to upgrade their OS to the latest version.

This makes development a lot more simplified. However, it’s not the same for Android because of device fragmentation. An iOS app developer needs to worry less about the different versions being used on different devices. This subsequently improves the quality of applications.

iOS apps have to go through a thorough (often long) review process. This ensures that you are releasing the best quality apps on the App Store. Due to limited devices, these apps are generally bugs free which is another star.

It’s easier to create UI/UX for iOS devices. There are plenty of user-friendly frameworks that can be used to offer the best user experience for app users. It’s one of the greatest indicators of a successful business app.

5. Greater Visibility on the App Store

Apple’s App Store has various specific categories for apps. These apps are ranked on the basis of some complex algorithms. The reviews within the iTunes App Store help users make a rational decision regarding your app. These reviews also improve your app’s visibility on the app store.

The information above should be enough to highlight that your decision to seek iPhone app development services is perfect for revenue generation. Not only revenue, but iOS applications are reliable for many other growth factors that affect your business.

As an experienced mobile app development company, Narola Infotech is always ready to serve you with reliable business solutions. Our services are based on the expertise and specific business requirements of our clients. Feel free to reach out to us for related services and guidance..