5 Reasons to Use .NET Development for Your Next IoT Project

The Internet of Things (IoT) has emerged as a significant technological advancement. Its contribution to the market’s general progress has benefited the public. Even large corporations are collaborating to build exciting IoT projects to provide appropriate solutions for the market.

There is no question that the IoT has helped users by greatly increasing the efficacy of the system. It uses one of the most spectacular programming languages which is object-oriented- .NET.

However, there is a continuous debate over whether other platforms will work well with IoT instead of .Net. To ease your concern, we have compiled a list of reasons why you should use .net development for IoT. 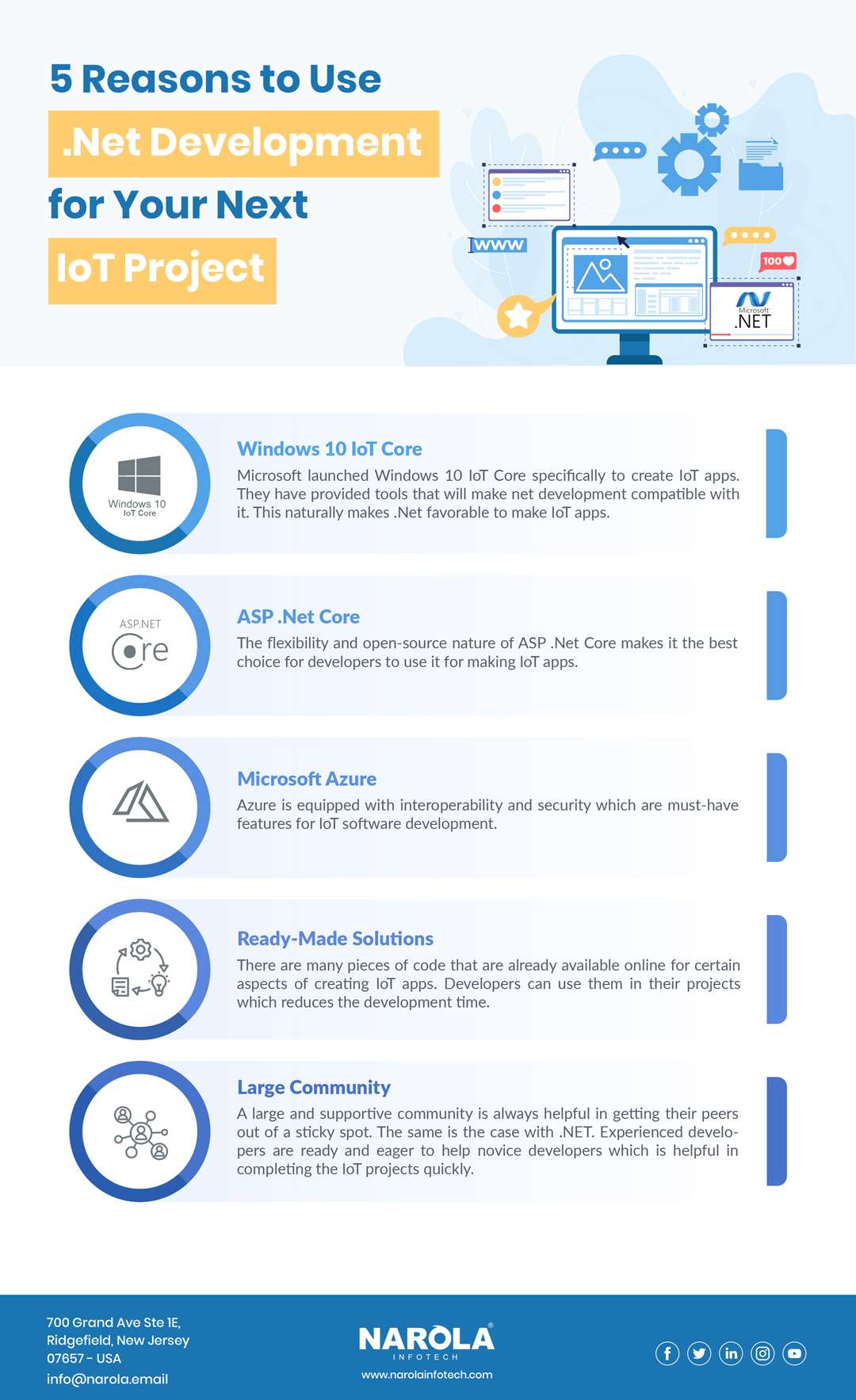 Reasons to Use .Net Development for Your Next IoT Project

The Windows 10-based embedded operating system (OS) was introduced in 2015. It runs on low-power mass-market devices. Since Microsoft created the .Net platform too, it is fully compatible with Windows 10 IoT Core.

Windows 10 IoT Core comes with a useful toolbox and several integration possibilities. This is because of Universal Windows Platform (UWP), Visual Studio, and Azure Cloud Platform,

ASP.NET Core is a very popular free cross-platform and open-source web framework. It makes it simple for Dotnet developer teams to construct engaging online apps. It also applies to the Internet of Things (IoT) applications. With Windows 10 IoT and ASP.NET Core, developers can create beautiful apps that you can execute on your IoT device.

ASP.NET Core has a robust toolset and supports multiple programming languages like C#, Visual Basic, and F#. It is quick to install, has strong security, and provides out-of-the-box speed. One important requirement of IoT development projects is cloud integration that ASP.NET Core fulfills.

Developers can use any cloud platform for their apps. This includes Amazon Web Services, Google Cloud IoT, and Microsoft Azure. ASP.NET Core is simple to deploy on the cloud. Developers can even utilize the same .NET runtime that they use during development to publishing a project. As a result, there will be fewer bugs.

Microsoft Azure is widely regarded as one of the greatest enterprise-grade platforms on the market. It is ideal for IoT software development. Microsoft offers an Azure IoT platform with IoT accelerators, data storage, and data recovery. For IoT developers, Azure’s flexibility, interoperability, security, and analytics are all critical in developing a well-functioning IoT app.

A wide range of services is available through this dependable and secure cloud platform. Setting up an application host or runtime in the Azure Dashboard allows developers to quickly deploy apps in the cloud. Top Microsoft experts are always working on Azure to introduce new features and make essential changes.

It’s uncommon that you’ll run across a problem with your code that hasn’t already been reported and fixed somewhere online. This is why net development encourages developers to save time by using pre-built solutions. If developers experience difficulties with the development, there’s a possibility that someone has already solved it and released the code.

Large communities, such as .NET, generate a lot of reusable code. It can greatly accelerate the creation of IoT apps. The .NET Framework class library can further expedite the process.

Every developer understands how valuable it is to have a supportive community. A community that is always willing to assist its counterparts. A similar community exists for .NET too. There are more than two million developers working with the .NET platform.

This means there are two million individuals willing to share their experiences and discuss difficult topics. Thousands of professional developers with hands-on expertise from all over the world can assist thousands of less-experienced peers. They promptly answer queries and provide many answers at once.

So, if your Dotnet developer team faces any issue while creating your IoT solution, it can rely on the online community to help them. That will help in saving both time and money.

The .NET platform is an excellent environment for developing IoT apps because of its development services and comprehensive tooling. Its open-source approach and strong community support also facilitate the development of IoT apps.

Our IoT software development company Narola Infotech, extensively uses .NET development to develop IoT apps. If you have an idea for an IoT app, feel free to contact us. We will make sure that you receive all the support necessary to make your app successful.